As we close another unusual year, I wanted to take this opportunity to provide you with some reasons for optimism in 2022.

While we were not able to meet in person for the Annual Conference again this year, in November the Executive Board did travel to an in-person board meeting for the first time since March of 2020. It was a wonderful treat to see everyone (at a safe distance, of course) and to share thoughts, ideas, and some long overdue laughs together.

It was especially heartening to meet our newest board members, Christina Elliott from Ohio Deferred Compensation and Stephanie Biddle from Prudential. Both are long time NAGDCA members, and both will be tremendous assets to the organization. They made an immediate impact on the conversation and represented both the government and industry memberships well in their first meeting.

Christina and Stephanie not only represent you, as members; they also represent an important group in the public sector. According to the Bureau of Labor Statistics, state and local government employs a large majority of women – 59.8% as of October 2021 compared to 49.8% of the employed population overall. With the addition of these two new women, we are proud to say the NAGDCA Executive Board is now majority female for the first time in over a decade, better reflecting the constituency they represent.

The purpose of the meeting in November was to look ahead and develop NAGDCA’s strategy for next year. A large part of that strategy will be a heightened focus on our legislative program. As you know, Congress introduced several pieces of legislation this year that included most of our Legislative Priorities. While we do not believe any of these bills will pass before the end of the year, we do feel good about the chances for next year.

In fact, we are working with congressional staff to advocate for movement on a bill next year, and they have asked for your help! An essential first step in passing retirement legislation is getting senators from both parties to co-sponsor the bill. This will make it less controversial when it comes up for a vote. You can play an important role in educating the senators your state and their staff from on the need to pass NAGDCA Legislative Priorities like eliminating the first day of the month rule and allowing CITs in 403(b) plans. 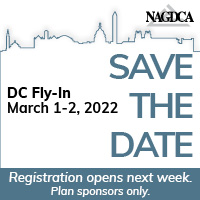 To facilitate these conversations, we want you to join us in Washington, D.C. where we will be hosting our first D.C. Fly-In event in March. The event will include information sessions to get you up to date on the latest from Washington, training from our expert staff at Groom Law, and the opportunity to meet face-to-face with congressional staff from your district and state. Whether you run the plan from the largest state or the smallest municipality, your voice is important in helping us advocate for the future of public retirement plans. Be on the lookout for more information in the coming weeks, and please join us!

So, with possible legislative progress, better representation on the board, and the first small step to returning to in-person meetings – we’re looking forward to turning the page on 2021 and starting a productive new year. Until then, have a restful holiday season and thank you again for your membership and everything you do for this industry.

The Infrastructure Investment and Jobs Act (the “IIJA”) was signed into law by President Biden on November 15, 2021. Although the majority of the IIJA relates to infrastructure, the package has two retirement related provisions:

Additionally, on December 3, 2021 President Biden signed a bill to fund the government through February 18, 2022. This stopgap measure provided funding for key federal agencies, but left many policy and appropriations issues unresolved.

On November 19, 2021, the U.S. House of Representatives voted to approve the Build Back Better Act (H.R. 5376, the “BBB Act”). This budget reconciliation bill includes several retirement provisions, as outlined below, as well as much of President Biden’s economic and social policy agenda, including universal pre-K and an extension and enhancement of the child tax credit. The bill passed on a party line vote of 220 to 212, with all but one House Democrat voting for the bill and all House Republicans voting against it.

Senate Majority Leader Chuck Schumer (D-NY) has publicly stated he expects to take the bill up prior to the New Year. Likely the Senate will make substantial changes to the bill in order to secure enough votes for passage. Under discussion are changes to paid family leave, immigration-related provisions, and state and local tax (“SALT”) deduction relief.

Furthermore, Finance Committee Chairman Ron Wyden (D-OR) has indicated the Senate may add additional tax raising provisions, including a new billionaire surtax.  This would result in the House having to vote again on the Senate-passed version before the bill can to go to President Biden for his signature.

The outlook for passage of this bill is unknown, particularly given the $1.7 trillion cost of implementation. The BBB Act includes roughly $1.4 trillion in corporate and individual tax revenue raisers over ten years. Additionally, it is anticipated that the BBB Act would result in hundreds of billions of dollars in increased revenue from IRS enforcement.

Limitations on High-Income Taxpayers with Large Account Balances
The BBB Act as passed by the House retained a provision limiting high-income taxpayers with very large IRA and/or defined contribution account balances. Specifically, the BBB Act would limit contributions to Roth or traditional IRAs for years in which a taxpayer’s income is over $400,000 per year ($450,000 for married filing jointly (“MFJ”) and $425,000 for head of household (“HH”)) if that individual has more than $10 million combined in aggregate IRA and defined contribution retirement accounts.  Contributions to an IRA exceeding the limit would be subject to an annual 6% excise tax.

For individuals who meet the taxable income thresholds and whose account balances exceed $10 million, the BBB Act would create a new Minimum Required Distribution of 50% of the amount in excess of $10 million.  If an individual’s aggregate account balances exceed $20 million, the BBB Act would require the individual to first withdraw Roth account balances in either the amount necessary to reach $20 million or the balance of the Roth accounts, whichever is less.  After the Roth withdrawals, the individual may choose how to reduce their balances to $10 million.  Special increased withholding rules also apply.  These amounts would be eligible for distribution – notably, the bill would clarify that distributions of excess amounts are not taxable (e.g., are treated as a “qualified distribution” under the Roth rules).

Additionally, the bill requires plan administrators to report to the IRS and employees regarding vested accounts with balances in excess of $2.5 million.

Unlike the previous version, the BBB Act now contains a delayed effective date for these provisions, which would be effective for tax years (plan years for the reporting provision) beginning after December 31, 2028.

Although the provision is unlikely to apply to most governmental plan members, these new rules could impact governmental defined contribution plans, especially where a plan covers long-term highly paid employees or, because of the aggregation rules in this provision, an individual has separate high balance accounts from employment outside of their current plan.

Elimination of “Back-Door” Roth IRA and In-Plan Roth Conversions of After-Tax Amounts
The House did not alter the provisions from the September version of the BBB Act that would prohibit taxpayers with taxable income above $400,000 ($450,000 MFJ, $425,000 HH) from executing a Roth conversion from a traditional IRA or employer-sponsored plan, effective after December 31, 2031.

Although the BBB Act is taking up much of the political oxygen in Washington as 2021 draws to a close, it largely does not impact governmental plans. However, as previously reported, there are a few bills that Congress is considering which do.

SECURE 2.0, officially titled Securing a Strong Retirement Act (H.R. 2954), contains two of NAGDCA’s top priorities: allowing 403(b)s to invest in collective investment trusts (“CITs”) and eliminating the “first day of the month” rule for 457 plans. Action has not been taken on this bill since it was approved by the House Ways and Means Committee in May by a unanimous voice vote. Although it originally appeared possible that SECURE 2.0 components would be included in the BBB Act, the version of the BBB Act passed by the House did not bear that out.

The RISE Act incorporates many provisions from the Ways and Means version of SECURE 2.0, although it does not include the 403(b) and 457 provisions noted above. It does, however, allow 403(b) plans to participate in multiple employer plans (“MEPs”) and pooled employer plans (“PEPs”). The bill was considered and reported out by the Education and Labor Committee on a unanimous voice vote on November 11, 2021.

It is expected that the RISE Act will be merged with the Ways and Means version of SECURE 2.0 in the House Rules Committee before moving to the full House for a vote on the floor.

There has not been any recent action on the Retirement Security and Savings Act, also known as Cardin-Portman (S. 1770).  This bill contains the provisions noted above in SECURE 2.0, as well as:

Cardin-Portman has been referred to the Senate Finance Committee, but is unlikely to receive consideration before the end of the year.

The nomination of Lisa Gomez, President Biden’s choice to serve as Assistant Secretary for the Employee Benefits Security Administration (“EBSA”) within the Department of Labor (“DOL”), was approved by the Senate Committee on Health, Education, Labor, and Pensions (“HELP”) on December 2, 2021. Her nomination advanced by a vote of 12-10. Senator Lisa Murkowski (R-AK) was the only Republican who voted in favor. The nomination now moves to the Senate floor, which is likely to be a largely party-line vote, although some Republican votes remain in play.  It is unclear when the full Senate will consider the nomination.

We’re excited to announce the first annual DC Fly-In scheduled for March 2022. Plan sponsors will have the opportunity to help NAGDCA strengthen our message around key legislative priorities and reinforce NAGDCA as the primary resource for policymakers on public sector defined contribution plan issues.

The Fly-In offers NAGDCA government members a unique Opportunity to:

SAVE THE DATE – 2022 INDUSTRY ROUNDTABLE 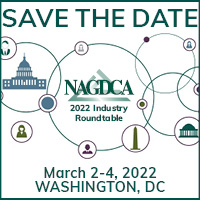 The Industry Roundtable offers attendees a unique opportunity to meet and discuss important legislative, administrative, and strategic issues facing public sector DC plans. The meeting is exclusively for industry representatives and is designed to address concerns specific to their needs.

The agenda will provide attendees with the maximum amount of information and opportunity for creative participation, while at the same time limiting your time away from the office.

NAGDCA recently published its 2021 Annual Report that provides an overview of the association’s membership and activities over the past year.

NAGDCA would like to thank our industry partners for your continued support as members and sponsors over the years! We’re excited to offer sponsorship packages for 2022 that provide valuable year-round benefits as well as recognition during the annual conference on September 18-21 in Baltimore, MD.

Click here for more information about the sponsorship benefits, and please don’t hesitate to contact us with any questions.

Congratulations to Michelle Berklacich on her recent retirement! Berklacich spent 35 total years in public service with 24 of those years at California Savings Plus plan. She has been an active and supportive member of NAGDCA over the years and will be missed by all involved with the association.

We wish you a happy and fun retirement.

Happy holidays from NAGDCA! Headquarters will be closed 12/23-1/2.